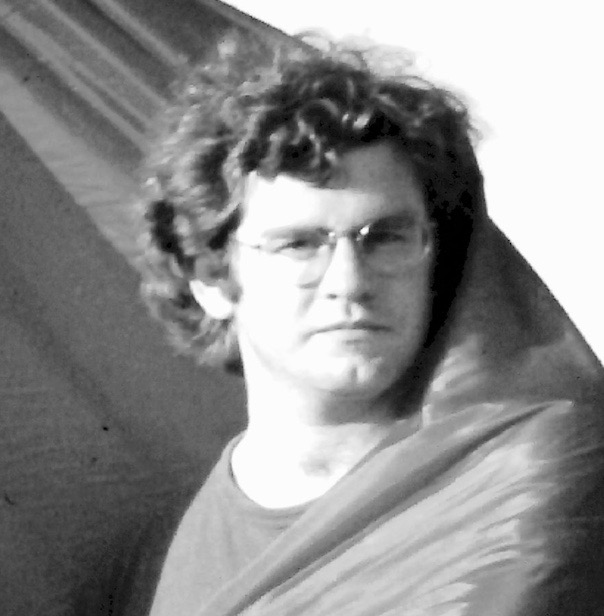 I came to Old City via Gary Grissom and WILMA. [Clark told the story of how WILMA ,circa ‘76 or ’77,came to Old City because the production they were presenting in their loft space near 12 & Vine Sts had nudity and was closed down. So they re-located the presentations to Grissom’s loft. His space was even more illegal than 12th & Vine. Anyway that’s when he met Jac Carley and all the people who lived in the building came to the show. The 2nd weekend run got front page coverage in the Inquirer but a 3 foot snowstorm kept all the papers from being delivered that weekend, so fame and audience eluded them].

In Old City I performed at Bread Street, ETAGE and Painted Bride on Vine St. WILMA was managed by Chris Hayes. I started a group at La Salle and kept it going after graduating in 1974. (I grew up in Glenside) It was called Imagination Theater, and we merged with Manning St Theater run by Stuart Finkelstein. I was interested in Finkelstein because he was a follower of Grotowski. We did a production called “Kaspar Hauser” in Old City. Our group dissolved after Finkelstein left Philly. And then we merged with WILMA Project. Hayes had a $30,000 grant. After attending a workshop with Richard Schechner we started working with real life material. We brought Spaulding Gray’s “Rumstick Road” to the CA at Penn. So we dropped Project and just called ourselves WILMA. We presented other groups and artists like Kei Tei Kei. We presented at many different venues. We did “festivals” i.e. grab a bunch of things and call it a festival. We also did a presentation at ETAGE as a work in progress of “Lives of The Saints” a work initiated by Barbara Dufty and in collaboration with me. I was not satisfied with collective effort so I quit the group.

WILMA did get regular support from PCA at that time. But mostly everyone was underfunded or not funded. Peer review is dicey. Someone didn’t like my piece and so WILMA funding was diminished that year. I was at GPCA later ,when I was at Clay Studio, and they were recovering from failed initiative “Ticket Booth.” The GPCA couldn’t get grants at that time because they didn’t want to compete with their members. They had a string of directors from small organizations, because none from the larger organizations wanted to serve.

By 1979 Jac Carley was going to Berlin, so I followed her there. Where we lived for 6 years. I did some theater there in a clownesque group called “Brothers Panic.” I was also a potter during that time and got more into that art form. But wanted to get back into theater. When I returned to Philly I started a comedy group “No respect for the human condition players” who performed in 1985 at the Bride. I was keeping up my ceramic practice all the while, so it was appropriate that in 1986, I became Director of the Clay Studio when it moved to 49 N 2nd Street.

I participated in Bricolage’s piece in Wear White At Nite. I was a hawk in “Taking Tiger Mountain.” We did two showings – which differed in format from the shorter walk-by works in WWatN. It was the finale. WWatN was amazing. I remember “Living Room at the Bottom of the Lake.” Jac was in that. Was Eileen [Mulgrew] in that? cutting onions ? Did you have a grant to do that? [JC: No. People donated things for the first run. So there was box office. The second run we got a $500 grant from OCA]

I never went to OCA meetings, I would get reports from Gary. He said it was pretty chaotic. There was a strong contingent who wanted to work collaboratively, but not much more group organization than that.

And who found the box of surfer boy postcards at Neubauer’s? That became a masthead or logo of OCA. I had a year or so correspondence with David Deakin with Mail Art, artist made postcards.

My involvement got stronger in Old City when I got involved in Clay Studio in 1986 I was there for 16 years. I saw a huge arc of transformation during that time. We opened in what was called the 2nd Street Art Building. Nexus, High Wire and Zone One were there, too. I wanted to have the Clay Studio mixed in visual arts galleries so to be considered more art than craft. Nexus was a stepping stone for visual artists in Philadelphia. When we opened the building all together we had a thousand visitors. We charged $10 entry and made $10,000! We became the impetus for First Friday when we coordinated openings.

We started Old City Arts Association of galleries. First Friday became a runaway train in the mid-90’s Giving away booze turned out not to be so good. Clay Studio started to charge for booze. (PA LCB didn’t bother us). Galleries are now dropping like flies. Rosenfeld was one of the first and was there for a very long time. Wexler is still going. But there’s less and less a need for physical space. Things happen on the internet. The neighborhood organization was very organized against having more bars north of Market Street.